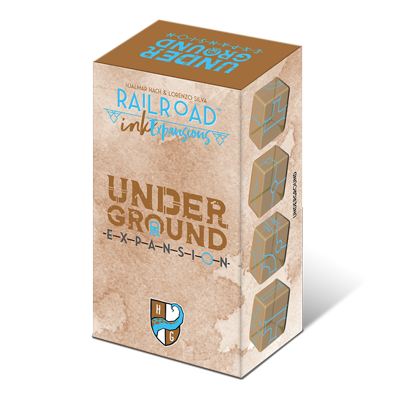 An expansion pack for Railroad Ink series, the critically acclaimed roll and write games where you draw routes on your board trying to connect the exits at its edges. The Underground Expansion Pack contains 4 dice that you can use in two ways, for the Standalone mode or for the Expansion mode.

Note: at least one core set of Railroad Ink™ or Railroad Ink Challenge™ is required to use this expansion pack.

Underground is a single 4 dice expansion. Manage an underground network of Subways and Water Pipes. You can use the Underground dice either as an Expansion to the base game or as a standalone game.

INTERACTION BETWEEN SURFACE AND UNDERGROUND

The the two boards interact in two ways: you can create Hubs and gain points by matching the positions of Subway Stations and surface Stations; additionally, you will break a pipe and lose points if you draw a surface Station above a Water Pipe space.

Creating a Hub: If a surface Station and an underground Subway Station share the same space, fill the Subway Station: it is now a Hub.

Breaking a Pipe: Drawing a Station “on top” of a pipe will break it, but not vice-versa.

When playing the Standalone version, you only play with the Underground board. Follow the rules of the Expansion Mode with just a few changes: